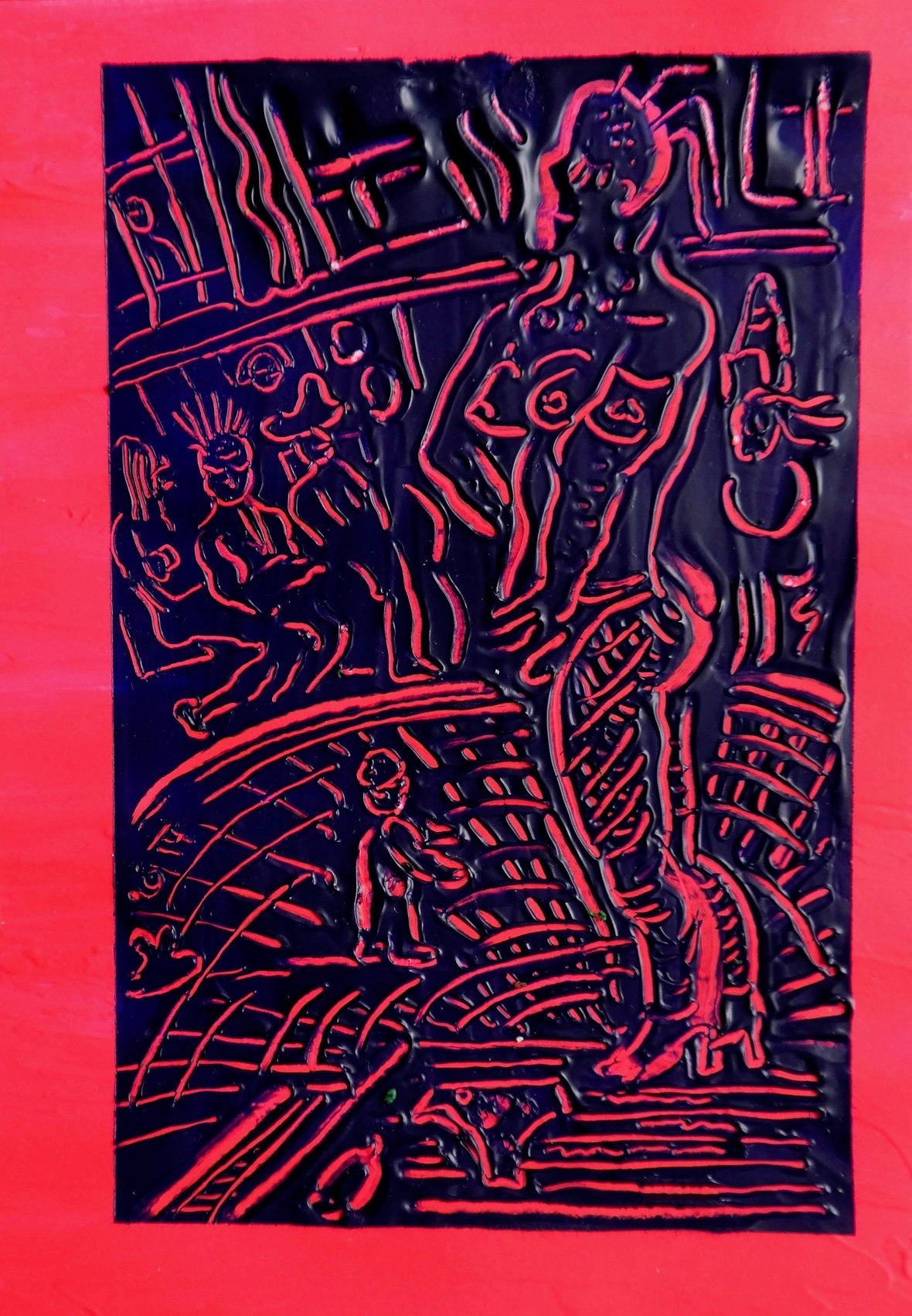 Matvey Slavin was born in 1987 in St. Petersburg, Russia, as a child, he moved with his family to Germany. As a teenager, he began exploring his new home town of Hamburg with a collapsible field easel, painting under the open sky as a way to get to know the city's rhythm and its inhabitants.

Scenes involving people and everyday life still characterize Matvey Slavin's pictorial universe today. Now living in Copenhagen, Matvey mainly works figuratively with drawing and painting, with motifs based on the sensed, the seen and the heard.

In 2013 Matvey was on a student exchange trip from the Academy of Fine Arts in Hamburg to Vienna, under professor Daniel Richter. The experience with especially etching and aquatint at the academy's printmaking workshop gave Matvey the unusual idea of transferring "Scratch Pictures" to painting under the designation "Engravings". Here he explores the tensions between colours, surfaces and lines.

The works, at a distance, seem like a monochrome veneer, but by approaching the image, details and lines swirl in to view. The motif is scratched utilizing the alla primatechnique, and "Engravings" are, therefore, literally and figuratively "impressions" of the world, being depicted. The produced piece is reduced to a monochrome whole with only a single colour peering through.

In his pictorial compositions, Matvey scratches expressive lines which alternate in variable rhythms, groupings and spread. As a part of his process, he utilizes no brushes, but rather he applies the paint to the paper or canvas with his fingertips and palms.

Working with nails and palette knives in different sizes, he then incises the subject into the top coat of paint and, according to Matvey himself, this is the most direct, spontaneous way to capture an experienced motif.

When engaging the canvas with the nail, Matvey feels closer to the image surface than when using a brush. He is able to work in detail, but at the same time freely and energetically.

The subject must be scratched into the surface before the paint dries, and breaks are, therefore, not an option. This working method is deeply intensive. The fact that, with such simple means, one can tell a larger story, fascinates the artist Matvey Slavin.

Translation from the Danish: Karli Christensen

Etching into the Surface of Time (English)

In various ways, Der Momentfänger (Catcher of the Moment) created by Matvey Slavin in 2020, when the coronavirus pandemic set off a worldwide state of emergency, is a key work. It depicts the artist standing at the easel in a landscape, which he is evidently rendering on the mounted canvas. The hat worn by the artist while working on his painting also serves in a stylized form as a signet, a fusion of his initials ‘M’ and ‘S’. Both the self-portrait emerging from contours, and the landscape reduced to outlines and etched into the painted surface, remotely recall compositions by Vincent van Gogh (1853–1890). This is surely no coincidence: In Slavin's work art-historical references, montages of citations derived from a wide range of sources, and pictures within pictures are fundamental elements that recur in different shapes. The term Der Momentfänger (The Catcher of the Moment) reflects the artist's consistent interconnection of various aesthetic dynamics, spatial, and temporal levels quasi at “the tip of the moment” 1 in the instant of the respective representation. The aforementioned work revolves just as much around the making of pictures as around the coexistence of different phenomena in the flow of time, which converge in a “simultaneous image,” 2 becoming part of an expanding narrative.

Slavin's origins lie in landscape painting, which from 2006 onward was increasingly replaced by pencil drawings of everyday urban life, from which the Zeitbilder (Temporal Images) evolved. The starting point of this series was a long-term exploration of the northern German harbor city of Hamburg, where the artist, born in 1987 in St. Petersburg, spent his youth. In Hamburg, he studied at the University of Applied Sciences and the University of Fine Arts. In the course of an exchange program in 2013, he attended the class of the painter Daniel Richter (*1961) at the Academy of Fine Arts in Vienna. Here, he experimented with manifold print and etching techniques, developing from these his own unique engraved painting style, which since then has become his primary medium.

His method of etching pictorial motifs into layers of impasto acrylic paint on the canvas is a present-day revitalization of the grattage (Engl.: scraped/scratched work), which the innovative Dada-Surrealist Max Ernst (1891–1976) conceived after inventing the frottage (Engl.: rubbing). Subsequent to Max Ernst, representatives of the post-war avant-garde such as Art Brut initiator Jean Dubuffet (1901–1985), or the abstract-expressive creator of mythical ciphers, Cy Twombly (1928–2011), also took up the grattagetechnique. In his view, his engraved paintings offer Matvey Slavin, who has been living and working in Copenhagen since 2017, the possibility of conflating the quick tempo of drawing, the multi-layered complexity of painting, and minimalist conciseness with the immediacy of the incisions on the surface. As the artist states, “etching is like writing.” 3

Accordingly, he regards his engraved paintings as an intertemporal “associative language,” which reaches into the depths of the material and of history, spanning an arc to ancient Egyptian hieroglyphics and Roman inscriptions, all the way back to the cave paintings of our ancestors.(4) Acrylic paint, which the artist applies alla prima directly to the canvas in at least two layers with his hands, comprises the ground of his works. The top layer is incised with tools such as metal nails and palette knives while it is still wet, so that the pictorial motif becomes visible through the contrasting color of the underlying layer. Although the artist does not render his subjects in a naturalistic fashion, these are often drawn from his own personal reality. Recollected and imaginary scenes are combined with self-produced or archived photographs as well as art-related documents, which partially have been digitally arranged into composite scenes beforehand at the computer. In the physical traces imprinted in his engraved paintings, the impressions and visual evidence of experienced reality, which from the very beginning specifically included reflections on the art world, its products, and events, find concrete expression. These are haptic manifestations, which translate Roland Barthes's idea of photography as “an image rubbed off from the real” 4 into palpable materiality.

Humorous accentuation, clashes between seemingly contradictory elements, dreamlike scenes, the spontaneity of the sketch, a paring down to the essentials: Slavin's neo-surreal grattages not only operate between the times and locations, but also between mediums and atmospheres, internal and external perspectives, the unspectacular and the exceptional. Predominantly realized in thematic groups, since 2013 their subject-matter has ranged from a focus on everyday life at the academy in Vienna, including classroom, studio, and exhibition situations, to portraits, landscapes, and interiors. The artist's approach varies between cartoon-like condensation and filigree complexity, which has still increased in recent years. Thus, a number of engraved paintings created in 2018, which recall René Magritte's “mystification of the everyday and the banal,” 5 feature intricately interwoven forest segments, in which simplified pictorial symbols such as a cloud, a hat, or boot, a house, or a trophy reveal further ramified wooded areas that have been inserted in these.

Self-portraits produced in 2019 on one occasion represent the artist sitting at an easel in front of the painting of a couple in the landscape (Indoor Plein Air), and, in another instance, depict him seated with a drink at the table of a sidewalk café (Porter og Citronvand), which is situated in Slavin's new adopted hometown, Copenhagen. The subdued chiaroscuro hues of the latter scene prefigure those in the series Die maskierten Ostergenießer (The Masked Easter Enjoyers, 2020), which is dominated by grisaille tones, evoking the inversion of photographic negative images and half-tones of aquatint ink etching. On the one hand, it recalls an Easter ritual celebrated by the family of Slavin's partner and collaborator in joint performances, the Copenhagen-born artist Nana Rosenørn Holland Bastrup. On the other hand, in its phantasmagoric imagery with the figures costumed as Easter bunnies and chicks, gathered around opulently laden tables and folding chairs in the garden, it tilts into the surreal.

In a different manner, the series Blumenköpfe (Flower Heads, from 2020 onward), in which flowers equipped with heads instead of calyxes are depicted in vases bearing facial features, also revolves around masks, which gained acute relevance in 2020 in the context of the coronavirus pandemic. While the work Blaue Blumenköpfe (Blue Flower Heads, 2020) recalls Van Gogh's Sunflowers (1888), other flower-head conglomerates invoke the masked beings of the Belgian Symbolist James Ensor (1860–1949). A large-format interior scene, finally, created in 2020 and titled Я рисую, следовательно, я есьм. I draw, therefore I am, may be interpreted as a kind of aesthetic program of the artist. In a crimson-hued studio sphere, central representations of art and cultural history, such as the prehistoric Venus of Willendorf, ancient Egyptian figures, or a painting by the Dutch constructivist Piet Mondrian (1872–1944) are united: Like a visual network of inspiration, they enter into a dialogue on the wall of the represented room with some of Slavin's engraved paintings from the groups mentioned earlier. The artist himself, his face hidden by an Ensor mask, is gazing out at the viewer. In front of him, a laptop is placed on top of the table, and next to it a vase of Flower Heads, accompanied by a Russian Cheburashka doll. On the wall to the side, the line: Я рисую = я есьм (Engl.: I draw = I am) is displayed in Old Russian on a television screen.

Here, as both the author and subject of his work, Slavin in a way becomes one with his “pictorial notes on life.” 6  His “documents for our time,”7 where he embarks on a cognitive quest into the deeper dimensions behind the appearances of reality, simultaneously serve as repositories of transcultural, era-spanning memory and as sites of exploring his own existence and self-understanding as a painter traversing the tracks of contemporary modern life.

3 Matvey Slavin in a telephone conversation with the author on November 30, 2020.

7 Matvey Slavin in a telephone conversation with the author (see note 3).

[All Engl. quotes are the author's translation from the German.]